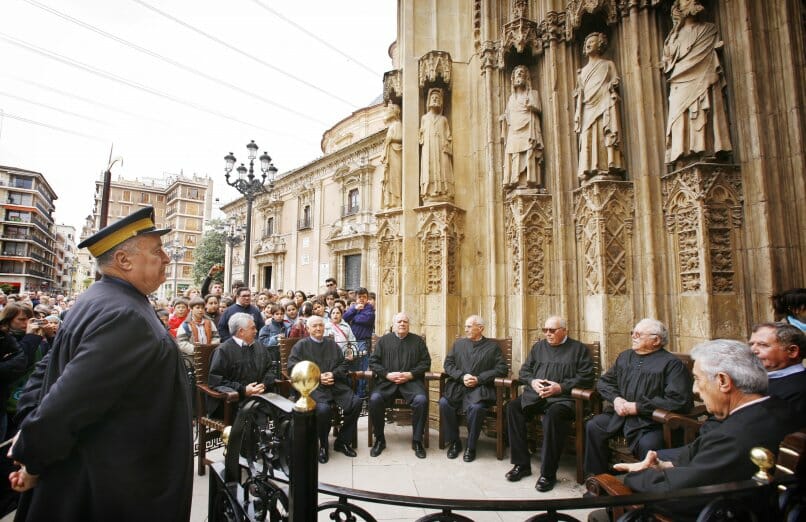 The Valencia Water Court is the oldest existing justice institution in Europe. It already existed since Roman times, but the organization that we have inherited dates from the times of Al-Andalus and, quite possibly, from the time of the Caliphate of Cordoba, perfected from the first moments of the conquest of the Kingdom of Valencia by the king. Don Jaime.

At the Puerta de los Apóstoles de la Catedral de València, the Tribunal de las Aguas (Court of Waters) performs a rite fervently preserved through a millennium. In it justice is delivered through an oral process and in the Valencian language whose resolutions are final. The Water Court is the only legislative structure that remains of those established by Jaime I. The Arabs already practiced this irrigation system, which the monarch formally established, based on the distribution of the Turia water.

It is made up of eight farmers who still wear their black blouse typical of the people of the garden, who are democratically elected every two years by the other irrigators of the same. Seated in a circle on separate wooden and leather armchairs from the 17th century, they are invested with a corresponding authority.

The structure of the irrigation, the participation of the farmers and the speed with which the problems are resolved, has projected the Valencia Water Court to the international arena, considering it a model institution. Without a border of folklore, effective and essentially Valencian, the Court exercises before a curious public in which there is no lack of young university students and foreign visitors.

The Tribunal meets every Thursday at twelve noon at the Puerta de los Apóstoles de la Catedral de Valencia. On holidays that coincide with Thursday, the Court session is brought forward to Wednesday.