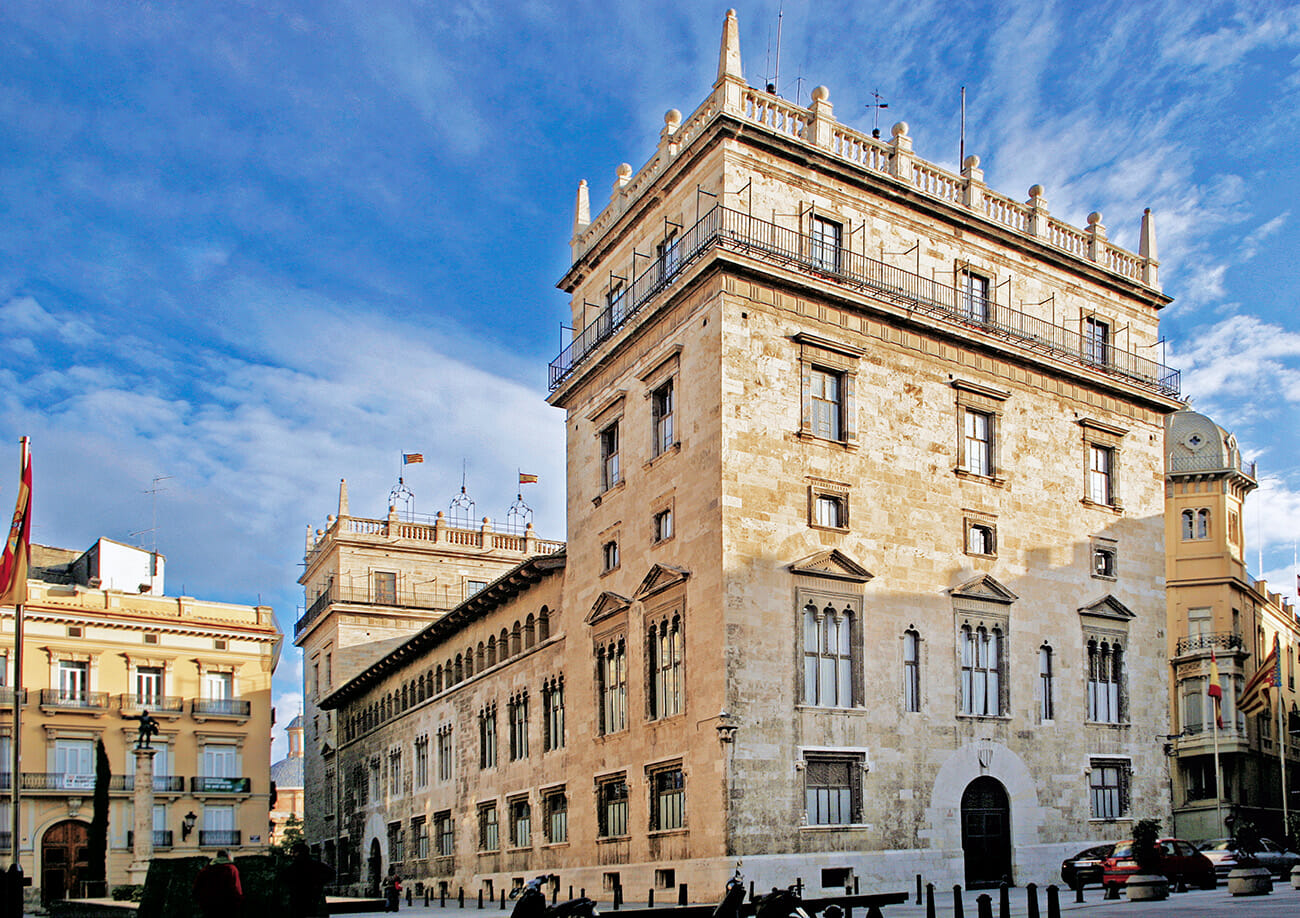 The Palau de la Generalitat de Valencia is the building where the official seat of the Autonomous Government of the Valencian Community is located. It is located in the Plaza de Manises, next to the Plaza de la Virgen, and at the opposite end of the street that starts in the Torres de Serranos – which gives its name to the street.

In addition to its political symbolism, this building, which dates back to the 15th century, constitutes one of the best examples of the city’s civil architecture. Perhaps because the mix of styles reflects the open character of the city and the receptivity to changes typical of the Valencian idiosyncrasy.

The inner courtyard and the flown staircase – a hundred years later – as well as the Gothic façade; the corners and falcon doors, Renaissance; the classicist second floor windows or the balustrade that crowns the towers, escurialense, make up the combination of architectural styles.

Inside, a rich heritage and interesting works by painters Mariano Benlliure and Ribalta, or frescoes by Juan de Juanes or Juan de Sariñena, among others, stand out.

The new tower, located in the west wing of the Palau, was built at
mid-20th century, the work of Luis Albert Ballesteros. The small garden of the building, located outside and overlooking the Plaza de la Virgen, occupies the site of what was the old City House.

From its origins, the Palau has been an institutional center. First, and for almost three centuries, as the House of the General Deputation of the Kingdom of Valencia (1421-1705).

Origin of the Valencian Generalitat

Created in 1362 by the Valencian Courts, the Generalitat was a delegated commission in charge of managing and administering the donations and taxes offered by the three constituent arms of the Cortes (ecclesiastical, military and civil) to the Crown of Aragon. They were the so-called ‘generalities’, created in principle to cover the war with Castile.

However, the precarious economic situation of the Crown at the beginning of the XV century caused the consolidation of these taxes, which meant the establishment of an institution in charge of administering them: the ‘Generalitat’ or Deputation of the Generalitat of the Kingdom and its components would be called deputies.

In 1403 the Valencian Courts named thirty-two deputies belonging to the ‘Generalitat’: eight were for the king and the rest were distributed in eight by each arm: ecclesiastical, military and civil, to legislate on issues that the Cortes considered minor. It also constitutes the highest regional institution of Valencians and represents the Kingdom in the absence of the Cortes.

In 1418 the deputies of the Generalitat decided to look for a venue in which to hold their regular meetings, so in 1421 they rented to the notary Jaume Desplà two dependencies of a «alberch» house in the current Caballeros street to use them as meeting rooms and clerk .

The chosen place was suitable for being quite central, very close to the old City House and the Cathedral, headquarters of the temporal and spiritual power, respectively.

The following year, in 1422, the purchase of the entire house would be made. The building had very modest dimensions, with the aforementioned meeting rooms and clerk, as well as a study on the stable. Since then, the building has undergone different extensions and numerous interior reforms, although its exterior structure remains original.