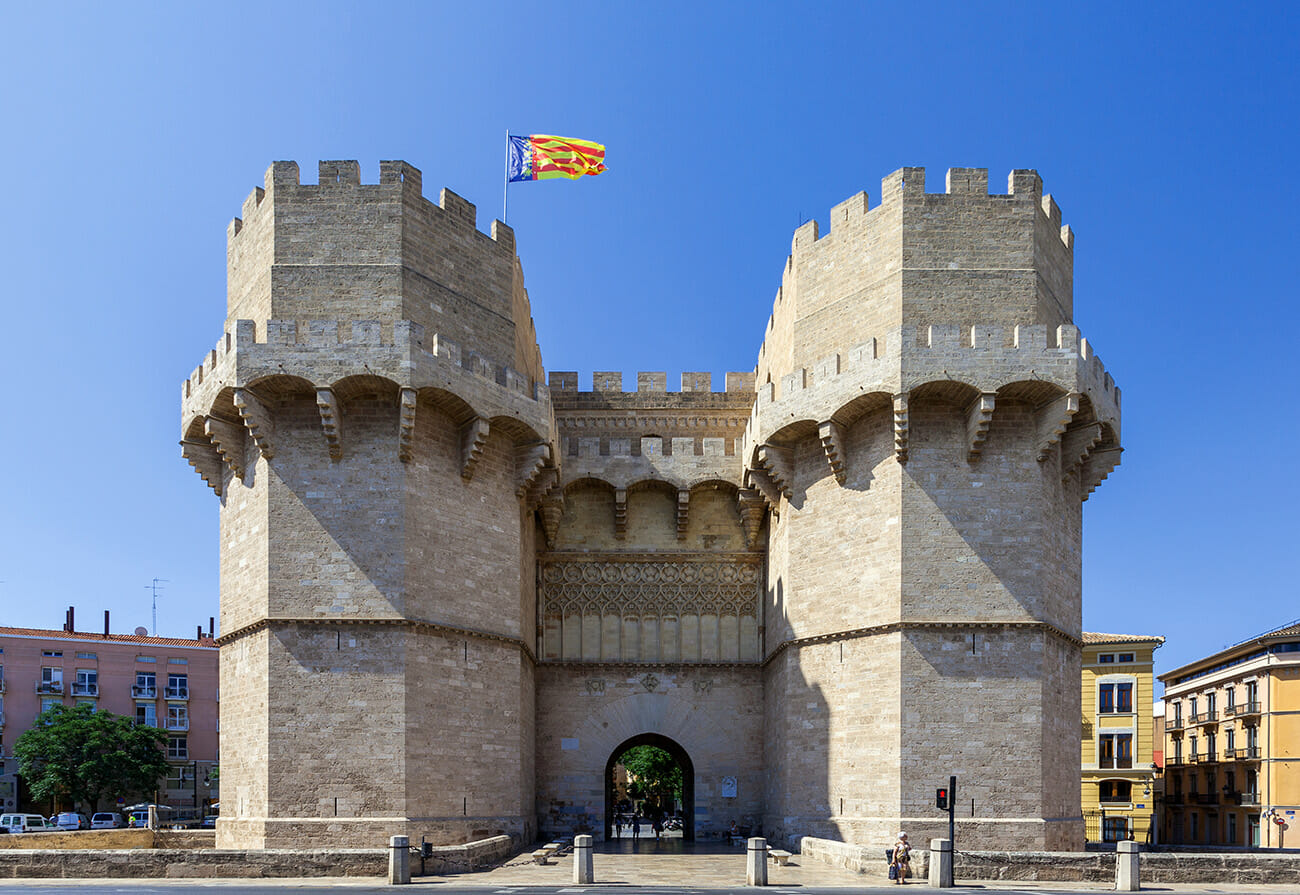 The Torres de Serranos in Valencia constitute one of the two fortified gates of the medieval city that the city preserves, along with those of Quart. Architecturally, these are two polygonal towers joined by a central body where the door opens in the shape of a semicircular arch.

They owe their name to its location, northwest of the old town, as a natural entrance that connected the city with the roads to the towns of the Los Serranos region (the royal road of Zaragoza, which converged with that of Barcelona).

Gothic in style, the Valencia Jury entrusted its construction to the master Pere Balaguer, who also collaborated in the construction of other emblematic buildings in the city: the Cathedral, the Miguelete or the Church of Santa Catalina, all a few meters from the towers.

The Torres de Serranos de Valencia collect, above all, the spirit of government of the city, since its creation sought to wrest control of the city walls from the noble elements who controlled certain pieces of said walls.

In fact, and despite being a work of military architecture, its grandeur and ornamentation respond to the objective of making them a symbol of the economic and social power of the city; in a matter of pride.

What’s more, they have never participated in a warlike act. After five years and with the works almost finished, the stone staircase that enlarged the building was projected. The works ended on March 19, 1398, an emblematic date for the city.

Although its main use was that of defense against sieges or attacks, it was also used for solemn ceremonies, citizen celebrations or official visits of ambassadors and kings, which is why it is considered the main access to the city, acts that make it a unique monument , regarding its condition (military) and its uses (social).

Kings and falleras doors in the Torres de Serranos in Valencia

Even today it preserves that character of space for official ceremonies since the traditional Crida, with which the Fallera Mayor of Valencia begins the Fallas, is carried out from them.

Precisely one of their main hallmarks is the open goal: they are unprotected on the inside for three reasons: from the military side, in case the enemy took the towers, which could not become strong inside; likewise, so that the military that defended them could not use them against the city itself; and from the social aspect, this arrangement turns them into a balcony and a viewpoint towards the interior of the city.

In addition, they have been used as a prison and museum. It was precisely this prison use that allowed the Torres de Serranos to remain standing despite the dismantling of the medieval wall of Valencia ordered by the civil governor, Cirilo Amorós. Declared a National Artistic Historical Monument in 1931, during the Civil War they became a depository for the works of the Prado Museum.

Throughout its history it has undergone numerous modifications in its internal structure. Thus, the Royal Academy of San Carlos carried out a restoration between 1893 and 1914. The last restoration dates from 2000, the date on which the stone was cleaned and the doors recovered their current appearance.

Its 33 meters rise imposingly next to the old Turia river bed -converted into an urban garden, sports stadium and meeting center- to exercise its historic function: to be the gateway to the bustling neighborhood of Carmen, full of small streets, numerous bars and a rich historical heritage, so it is common to see people contemplating the city from its crenellated terraces, which have become an excellent viewpoint of the city.