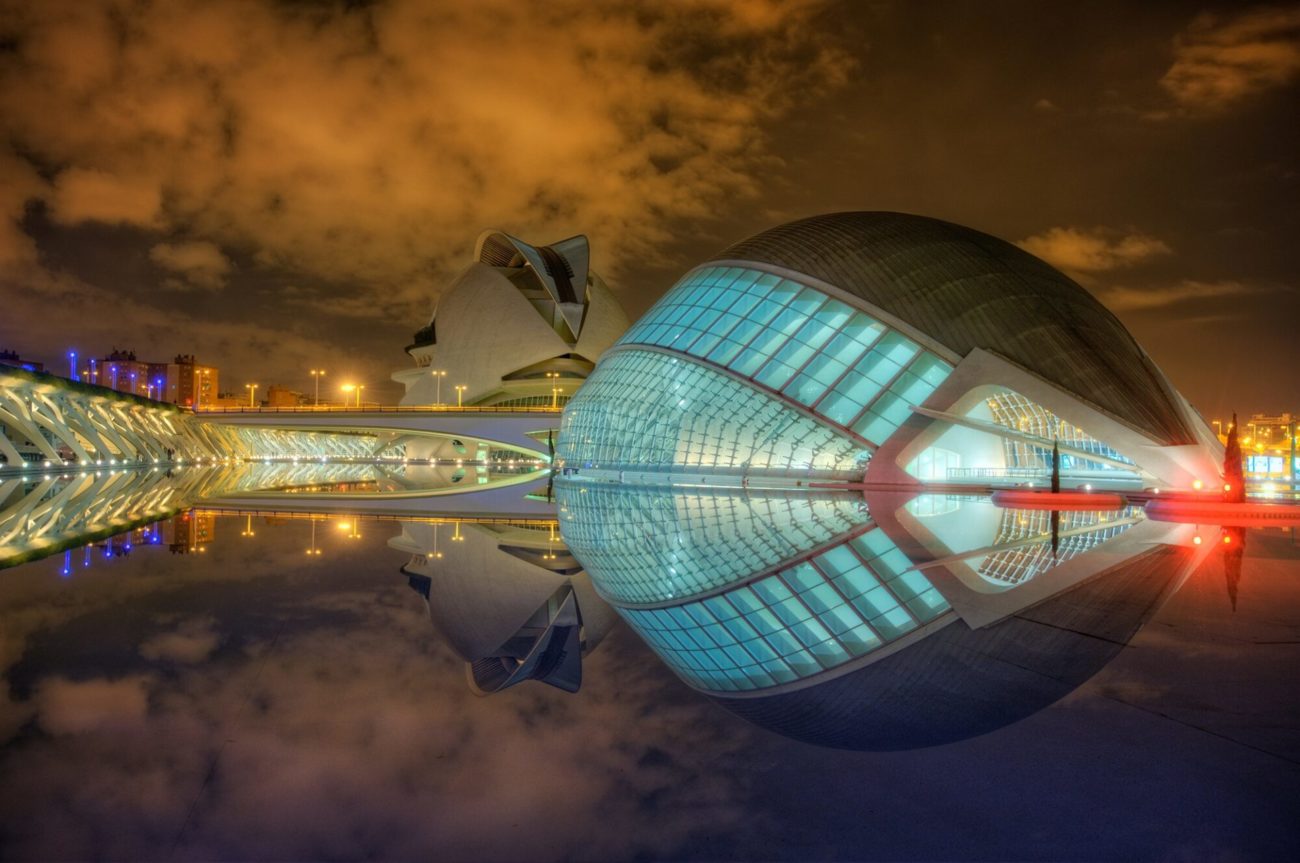 The City of Arts and Sciences has become the icon of Valencia and the most visited place in the city. Designed by Santiago Calatrava and Félix Candela, this scientific and cultural leisure complex occupies 350,000 square meters and stretches for two kilometers in the southern area of ​​the garden of the old Turia riverbed.

Attractive both for its avant-garde architecture and for its content, the motto ‘City within the city’ defines its concept: its six spaces are for all audiences. Conceived as a scientific pole, today it has become a tourist booster. In addition, it has been consolidated as an urban axis that has enabled the recovery and urban development of an area hitherto degraded in the city.

In 1998 it was inaugurated with the opening of l’Hemisfèric. The Príncipe Felipe Science Museum, the Palau de les Arts Reina Sofía, l’Umbracle, l’Oceanogràfic and the Ágora, next to the l’Assut de l’Or bridge, make up the city.

Undoubtedly, it has become the icon of Valencia, thanks to the Marathon Valencia finish line, films such as Tomorrowland or series such as Doctor Who, Westworld or El Embarcadero. Here too, numerous concerts have been held and competitions such as the Global Champions Tour of horse riding or the Valencia Open of tennis, among others, have been held.

McLaren chose in 2007 the City of Arts and Sciences for the world presentation of the MP422 race car that Fernando Alonso and Lewis Hamilton would drive that season in the F1 World Championship. Brands like Peugeot or Opel have also carried out advertising campaigns in their facilities.

With more than 2.7 million visitors a year, it was the fifth most visited monument in Spain in 2019, behind the Sagrada Familia in Barcelona, ​​the Reina Sofía and El Prado Museums in Madrid and the Alhambra in Granada.

The idea of ​​the project was to give character to the Turia garden, which linearly crosses the entire city, as well as to recover the southern neighborhoods of the city. Hence, the monumental buildings have typical Valencian elements and are designed with large open and public spaces, thus respecting the Mediterranean tradition of sea and light.

For this reason, and although each building offers specific functionality and is designed under its own concept, they share colors and materials to understand the project as a whole. The sheets of water unify and give continuity to the spaces.

After visiting the new Cité des sciences et l’industrie, de Paris, the then president of the Valencian Generalitat, Joan Lerma, officially commissioned the scientist Dr. Antonio Ten Ros, to write a first proposal for a City of Science and the Technology for Valencia. The preliminary project, entitled ‘Vilanova, A City of Sciences for Valencia’, was presented in May 1989.

For the preliminary project, with a budget of 556,000 euros (92,650,000 pesetas), Antonio Ten Ros created a team of 56 scientists, museologists and designers, including Professor José María López Piñero as head of the space ‘A walk through the history’. It was 1990.

The museum was to be the center of a cultural and tourist complex. The City of Sciences, consisted of a 382-meter-high communications tower – the third tallest in the world at that time -, an IMAX cinema, with a planetarium and a scientific museum. The total cost of the works was estimated at around 20,000 million pesetas, about 120 million euros.

In May 1991, the Generalitat proposed architect Santiago Calatrava as the designer of the projects. Discrepancies in the conception and functionality of the exhibition spaces led Dr. Ten Ros to depart from the project in May 1993.

With the works awarded and the foundations of the tower built, there was a change of government in the Generalitat. The new Consell paralyzed the works and announced the redesign of the City of Sciences “with a different philosophy.” The autonomous government decided to retake the Calatrava project, but not the communications tower.

The redefinition of the complex added art to science to form the City of Arts and Sciences, which maintained two of the buildings from the initial project: the science museum and the IMAX cinema with a planetarium, replacing the original icon -the tower -, for an opera palace and added a new element: an oceanographic park (l’Oceanogràfic).

Thus, the prestigious Valencian architect redesigned his initial work and presented his second project, consisting of three buildings: L’Hemisfèric in the shape of a human eye, the Palace of Arts, and the Science Museum. The Spanish-Mexican Félix Candela, one of the Valencian architect’s teachers, would prepare the L’Oceanogràfic.

In April 1998 l’Hemisfèric opened its doors to the public. Eleven months later, the Príncipe Felipe Science Museum was inaugurated, although the works were not finished. The museum opened to the public twenty months later.

On December 12, 2002, L’Ocenaogràfic, the largest aquarium in Europe, was released. And on October 8, 2005 the complex was completed with the opening of the Palau de les Arts Reina Sofía, the Valencia opera house. In 2009 the Agora was added to complete the complex.