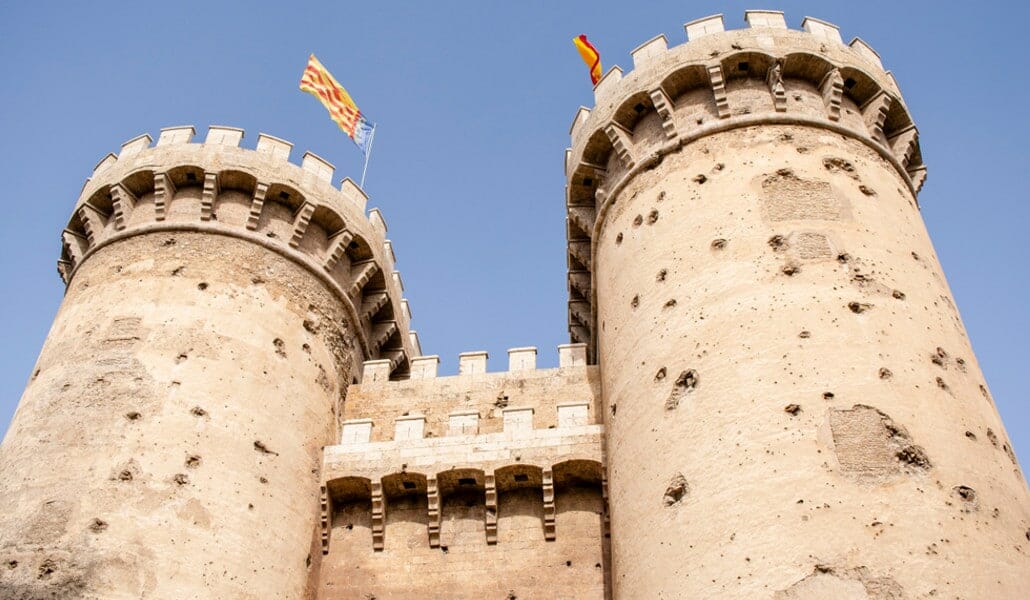 The Quart Towers of Valencia are also known as the Lime Towers because in the s. XVII the laws forced that the lime that entered the city was made through this door. Along with the Serranos Towers, they are the only gates preserved from the city old medieval wall.

Located on the street of the same name, they were the west entrance to the city. It was the old Castilla path, which passed through Quart de Poblet, the town from which they take their name.

Quart comes from the Latin at quartum milliarum that indicates the distance between the towers and the village. That is, four times a milliarum (1,000 steps, 1 mile, 1,480 meters). Within city walls, Quart street led – and leads – to Plaza de la Virgen and the old town.

Unlike its neighboring towers, the 34 meters of the walls of Quart Towers (one more than those of Serranos) accumulate many warlike episodes: the War of Independence, the War of Succession, the cantonal wars and the Spanish Civil War .

Still visible today are the impacts received by the French shots during the 1808 siege: 132 cannon marks and more than 1,000 rifle projectile perforations. Holes used by a parrot colony to nest.

The towers were built by decision of the city’s ‘Els Jurats’, the ‘Murs e Valls Fabrica’ and the ‘Mestre Racional’, in the mid-15th century (1441-1460). These two walled, semi-cylindrical mortar towers, sitting on a base in the form of a slope and joined by the door in the shape of a semicircular arch, reflect the military Gothic style. In fact, they imitate the towers of the Castel Nuovo in Naples.

Quart Towers: one of the four great gateways to Valencia

Pere Bonfill, in collaboration with Pere Comte -author of other buildings such as La Lonja– and Francesc Baldomar, built this National Monument (as it has been considered since 1931) in masonry and dressed stone.

Another difference with the Serranos Towers is the plant, cylindrical towards the outside and flattened towards the interior. The Quart Towers are an eminently defensive military building, so the decoration is scarce. In fact, the exterior facade is smooth precisely to make access difficult.

In 1623 the municipal council agreed that they be enabled as a prison for women; before it had been a powder warehouse and, between 1813 and 1932, it was a military prison. It was possibly that use the reason why they were not demolished.

Medieval Valencia had four doors: the two that remain standing and two others: the Puerta del Mar and the Puerta de San Vicente. The latter were demolished by order of the civil governor Cirilo Amorós during the 19th century, with a triple objective: to allow the growth of the city, improve its health, and give work to unemployed workers.