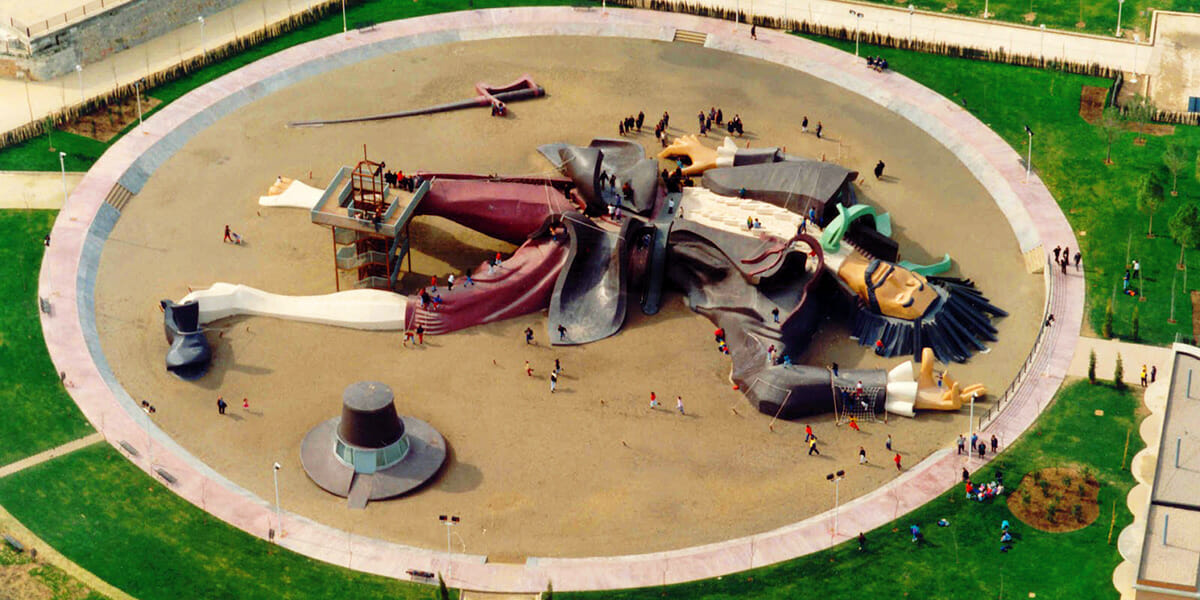 The Gulliver Park is located in the Jardín del Turia in Valencia, which was formerly the bed of the river. The main attraction is a monumental sculpture of Gulliver of 70 meters, from which many ramps, slides and stairs come out that will delight the little ones.

It represents the moment when Gulliver has been tied up by the Lilliputians. The figure is made on a scale such that the visitors resemble the inhabitants of Lilliput when they walked on the body of the character. It was commissioned in 1990 by the Valencia City Council to the architect Rafael Rivera and to the fallero artist Manolo Martín with a design by Sento Llobell.

The design and spaciousness of the spaces means that the attraction can be used by the little ones accompanied by their parents, and one of the slides is so wide that it allows the whole family to enjoy together.

The park has slides of all kinds of different length and height. The longest ones also have a special non-slip coating, which reduces speed to make them safer.

Young children can also slide with their parents on some of the family slides that allow multiple people to jump at the same time.

Gulliver is surrounded by lush greenery, a multitude of playgrounds, mini-golf courses, skate areas for skates and skateboards, and two giant chess pieces. The sticks for playing miniature golf are rented right there, in the area behind the figure of this character.

The area of ​​this garden occupies an extension of 61,000 m2, of which 15,000 belong to the great circle where the Gulliver is installed.

In this area of ​​the old Turia river bed, there are several bars and kiosks where you can have or buy something to drink or eat.

The space also has pubic toilets and a nursing service in case any mishap happens while playing on the slides. Most of the cures performed by the post are due to chafing or burns caused by the friction of the slides. The park also has a surveillance service from the City Council that ensures that everything runs smoothly.

It is a well-known park, very well valued, which is why it is often frequented by neighbors and tourists. On weekends or holidays the occupancy rate is very high.

In the summer months or very hot days, slides can burn from sun exposure, something to be aware of before children jump on them. For this reason, we recommend going with long pants that avoid chafing on the legs.