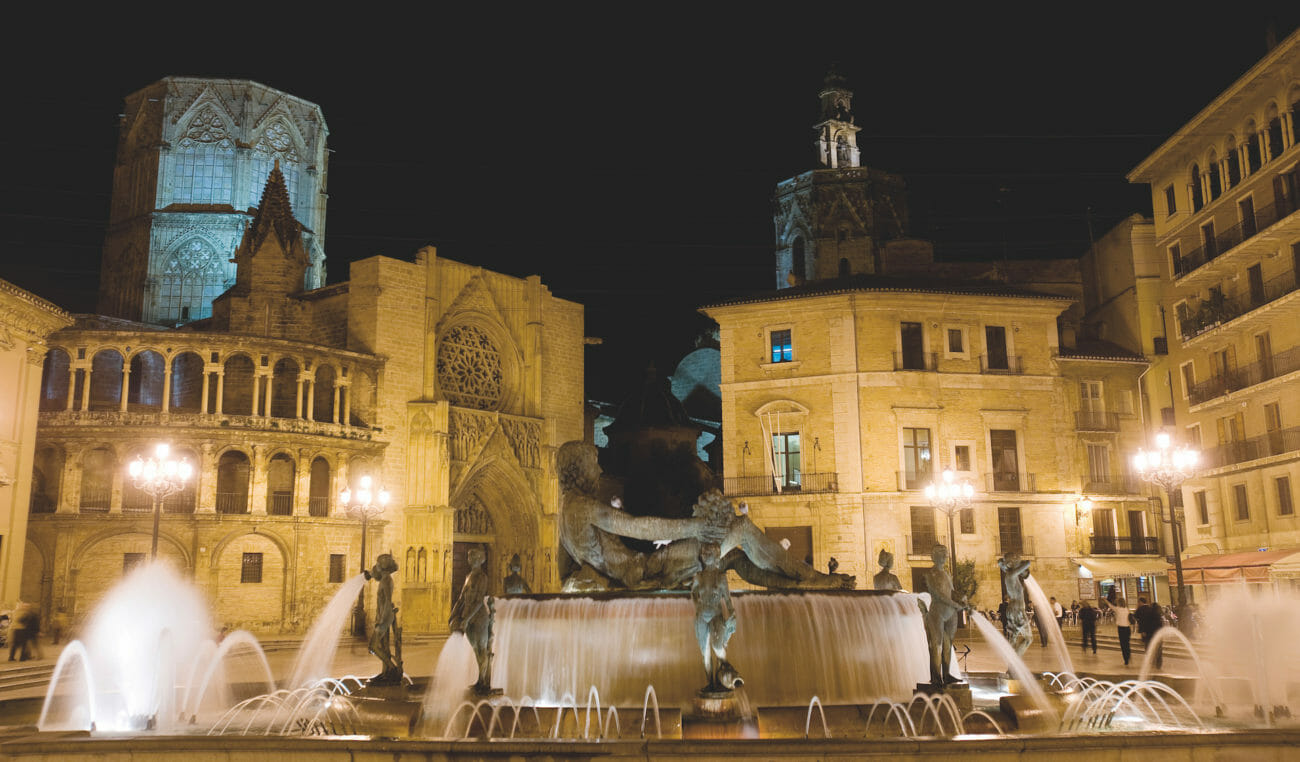 The first thing to know before making your route on foot through the historic center of Valencia is that two languages ​​are spoken: Spanish and Valencian. You will notice it on the street signs, since they are bilingual.

We recommend an easy tour to know the history of this city starting with the Serranos Towers. From there, we embark on the road to the Plaza de la Virgen. On the way you can see the Palau de la Generalitat, a Gothic building where the autonomous government is established.

A few meters away, in front of La Almoina, is the Décimo Junio Bruto square. The square is named as the founder of Valencia.

In this square is the Basilica of the Virgen de los Desamparados, and the Cathedral of Valencia, which are separated only by a passage and you will see that they are joined by an upper arch.

Lonja, Central Market and Round Square

Integrated to the Cathedral, is the Miguelete or Micalet, the bell tower symbol of Valencia. Just behind you will find the always lively Plaza de la Reina, which overlook the two bell towers with their own name in Valencia: the aforementioned Miguelete and Santa Catalina.

In it you can enjoy the sunny open space before diving into one of the most intricate areas of the old town of Valencia. We take the road to two buildings from different eras but share the same commercial aspect: the Silk Exchange and the Central Market. Both are World Heritage and are facing each other.

Next, on the left, the well-known Plaza Redonda, mandatory stop. Very close there, you will see a curious facade in Plaza Lope de Vega of just 62 cm wide! The oldest in Europe … Or so they say.

We continue along Trench Street until we reach María Cristina Avenue. From there you can appreciate the Central Market and right in front, the Silk Exchange. An unavoidable visit in this area is to the Church of Santos Juanes, which is located next to the Central Market.

We are now heading to the Town Hall square. What you see now as a large square, was actually a space that opened in the 20s of last century, after the fire of the old Gothic town hall, and after the need to build a new building.

In the square, the largest in the Historic Center, in addition to the majestic City Hall building, you will see modern buildings with insurance company emblems.

These companies were the ones that financed this urban remodeling, but above all the beauty of the classic style building of the Palace of Posts and Telegraphs will catch your attention.

Very close, in the network of streets behind this eastern slope of the square, it is worth visiting the Palace of the Marqués de Dos Aguas (Museum of Ceramics and Sumptuary Arts), one of the architectural jewels that you will find in the historic center of Valencia.

From there, on your route on foot through the historic center of Valencia you can visit the Estación del Norte, a marvel of Modernism, and the Bullring that is next to it.

And so we finished a walk of more than 2,000 years of history. You are in the most traditional area for shopping in Valencia, in the southern part of the historic center. The main commercial brands have a presence in the streets of Poeta Querol, Don Juan de Austria, Barcas, Colón, Roger de Lauria, Painter Sorolla, Cirilo Amorós and many others.