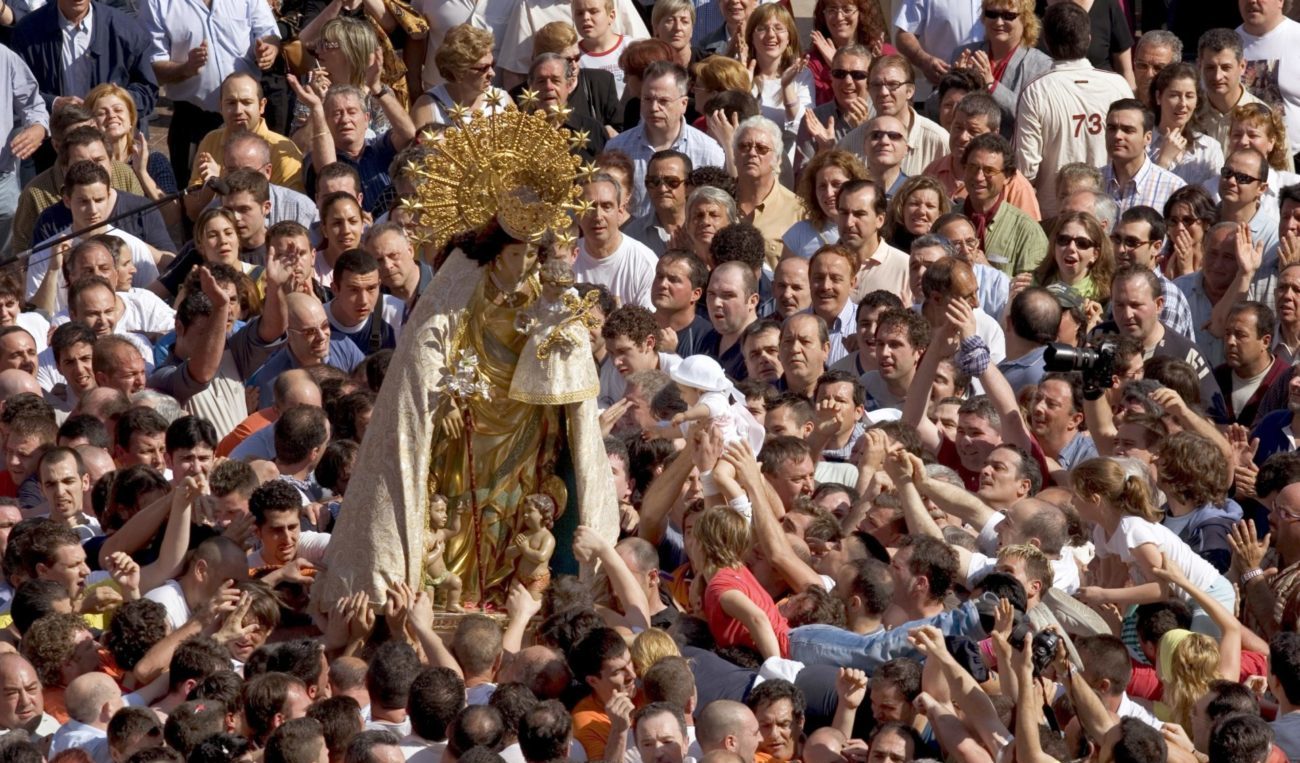 On the second Sunday of May, the Virgen de los Desamparados is celebrated, a day of passion overwhelmed by the Geperudeta, patron saint of Valencia and considered the mother of Valencians.

Thousands of Valencians walk throughout the night from their towns to attend the Descoberta Mass, which is celebrated at five in the morning in the Basilica Chapel. This tradition recalls the celebration of prayer by the farmers at dawn before starting their journey in the garden.

At eight o’clock, it is celebrated on an altar raised in the Plaza de la Virgen la Missa d’Infants, with the children as the majority public. Since 1957, at the end of the mass, the Joan Bautista Comes Children’s Choir has sung the Coronation Hymn, accompanied by the Symphony Orchestra of the Conserva José Iturbi ’Municipal Conservatory of Valencia.

But without a doubt, the most emotional and massive act is the Transfer. Valencia is a city of congregations: the Fallas mascletaes, the Valencia and Levante football matches, the concerts … and the transfer, passion overwhelmed by the Geperudeta, pure emotion and devotion. At 10:30, the Valencians crowd the route of just 200 meters that separate the Basilica from the Cathedral.

The pilgrim image of the Virgin (a replica to protect the original), a size of 1.33 meters, carries out the transfer from hand to hand, between scenes of fervor, squeezes, sways, emotion, verses or children who crawl over heads to touch the cloak of the Geperudeta.

“More votes than the Virgin”

The eagerness to touch the Virgin causes the image not to follow the path in a straight line, carried by the faithful on the left and right, even backward leaning over the heads of the faithful.

Once the layout is covered, the image accesses the Cathedral with its back to the Puerta de los Hierros. The reason? The Virgen de los Desamparados never turns its back on the Valencian people. In the afternoon, the image processes through the streets of Ciutat Vella under the smell and perfume of the flowers that are thrown from the balconies.

Although it has been held since 1885, the transfer became relevant in 1911 as a result of the intervention of local politician Félix Azzati, Republican and anticlerical, in Parliament: “I have more votes than the Virgen de los Desamparados. The Virgin has 5,000 and her enemies we have 22,000”.

The reaction of the Valencians was to go en masse to the Maredeueta festival, which brought together thousands of people. And so it has continued until 2019. This year, the Covid-19 will prevent one of the most emotional popular demonstrations in Valencia.

The Valencians affectionately nickname her Geperudeta, Humpback, for the hump that comes out when she looks at the child that she carries in her arms and that holds the cross. It is also venerated in countries such as Argentina, Chile, Costa Rica or Mexico, among others.

Hospital for the innocent, crazy….and homeless

On June 1, 1410, the Hospital d’Innocents, Follcs i Orats was inaugurated under the protection of the Virgin, Sancta María dels Innocents. The hospice was expanded to collect homeless, crazy, foundling, and abandoned children.

In 1414 four young pilgrims offered to make an image of the Virgin in exchange for food. After four days and since there were no working noises, they forced the door and found the image. The strange pilgrims had disappeared; which gave rise to the legend that “la feren els àngels” (made by angels).

The Coronation Hymn already says it, acclaiming it as ‘Queen and Sovereign of the lands of Levante’. A tribute of pure and true love because the Valencian “offers you the holiest devotion that can be professed. In Valencian lands faith for you does not die and your holy image we always carry in our hearts, beloved patron saint, mare dels bons valencians ”.

Artisan flavor to sweeten the day to the toilets