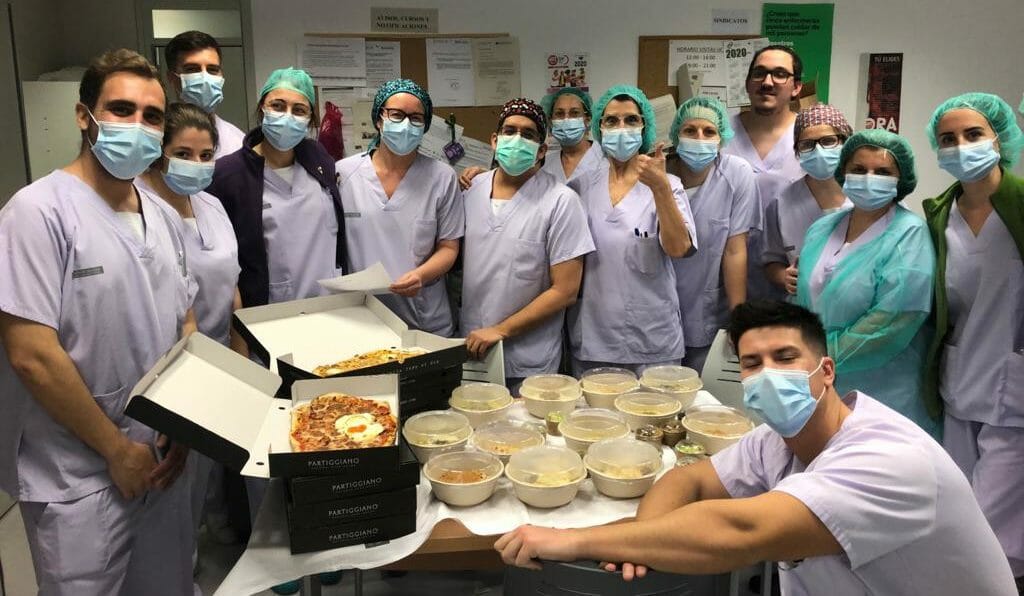 From ViveValencia we are doing a review to get to know, more closely, some of the companies that are collaborating with the solidarity initiative # Food4Heroes in Valencia. That is the case of Partiggiano, who is being in solidarity with the hospitals that changed the life of its owner, Alexis Cassany.

Alexis tells us that “everything we do at Partiggiano has to do with my wife’s life and with mine.” And it is that, both convinced of the macrobiotic diet, they decided to launch this Mediterranean cuisine project. Now, with the arrival of the CoronaVirus crisis, it was not going to be any different.

They have always had a very strong solidarity aspect. In fact, Alexis is one of the founders of the Small Wish Foundation with the well-known Father Ángel. Now, it was very clear that he wanted to help those who were having a bad time.

“A few days after the crisis began, a friend from Madrid called me and told me that an initiative was being launched there from the hospitality sector to bring food to the toilets. When I was going to see how we could do something similar here, I received a call from Paula (coordinator of the project in Valencia) and I didn’t think about it for a second «, recalls Alexis.

Every Saturday, Alexis arrives at his premises on the Paseo de la Alameda and begins to prepare the day for ‘delivery’ orders, but above all, what he will take to the hospital that day. «The first Saturday I decided to take him to the Quirón clinic. We are close to her but, above all, I experienced a very emotional moment because a few years ago, being with my father there for other reasons, she had a heart attack. They gave him a 5% chance of survival. After a month and a half, it went perfectly. They were phenomenal. I felt I owed it, ”Alexis recalls excitedly.

“Everyone was there with their nerves on the surface. I had not spoken to anyone, nor stayed with anyone. I went bare-chested. I just walked in with the food, walked over to the counter, everyone was running around and they said they couldn’t serve me. I did not care, I wanted to leave them the food “, he recalls while highlighting the enormous human quality of the toilets.

On the second Saturday, he decided that he would donate 15 menus to another hospital with which he has a special link: the Arnau de Vilanova. Almost 10 years ago, I had facial paralysis. They took me there, reassured me, treated me and everything was a scare. It was a product of stress. It was when I decided to leave my previous professional life and start in hospitality management », assuring that he lived an authentic personal revelation there that changed his life.

To the food donation he decided to add a letter of thanks for the work they are doing. To do this, he called a writing contest among his own employees. However, the winning letter was from an unexpected participant: her own daughter Lucia. In this video you can listen to it.

Throughout the conversation, Alexis does not stop repeating over and over that “they are the protagonists, the toilets” as she has hardly wanted to give visibility to this solidarity action. «We do it because it comes from within us, they give us much more than what we give them. We simply act according to our way of being “, downplaying their action.

However, both health professionals and Valencian and Spanish society, we cannot be more proud of our entrepreneurs. Actions like this of Partiggiano being in solidarity with the hospitals that changed Alexis’s life join many more, invisible to the avalanche of bad news, but which deserve to be told and known. You can learn more about the # Food4Heroes initiative on his Instagram @food4heroes_vlc.

How to arrive to Partiggiano: